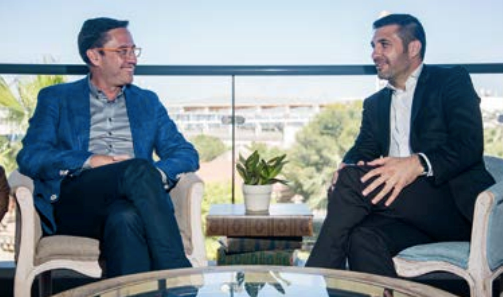 CustomSuits is the result of the business alliance of two great connoisseurs of the flexible spaces sector: Javier Reina, CEO of Reina’s Capital and director of Business World Alicante, and Juanjo Martínez, CEO of Networkia Business Center, a company that has three buildings in Madrid and two in Barcelona. With 15 years of experience in this field, Martínez does not hesitate to describe the current moment as “hatching.” The future of the sector has already arrived.

– Your company was established on March 12 of this year. How was your start up?

– It is, therefore, a clear business opportunity…

– What kind of services do you offer?

– With an eye on the short or medium term, which cities would be priority?

– What annual turnover can one of these buildings get?

– When was the turning point that led to the growth of this sector?

– The new needs for flexible work spaces are, in fact, largely linked to the new professions that are emerging in this era of digitalization…

– The Consell (with Digital District), the City Council and the Provincial Council are paddling in the same direction to turn Alicante into the headquarters of technology companies. They even talk about changing the current economic model.

– Do you see an interesting coexistence with the spaces offered by the Generalitat for DD, with the science parks and industrial areas?

– Is there any reference in the world linked to this business concept of flexible work spaces?

Flexibility for professionals is essential especially when, due to their activity, they perform most of the tasks ...
Read more

Flexible office: the secret of success

It is being shown that one of the bases of success for good business planning is being ...
Read more

A flexibles offices tailored to your needs

In recent years, the concept of Coworking or Business Center, also known as Workspace, has gained a ...
Read more

You can find out more about which cookies we are using or switch them off in settings.

This website uses cookies so that we can provide you with the best user experience possible. Cookie information is stored in your browser and performs functions such as recognising you when you return to our website and helping our team to understand which sections of the website you find most interesting and useful.

Strictly Necessary Cookie should be enabled at all times so that we can save your preferences for cookie settings.

If you disable this cookie, we will not be able to save your preferences. This means that every time you visit this website you will need to enable or disable cookies again.